Black Lunch Table (BLT) is an oral-history archiving project whose primary aim is the production of discursive sites, wherein cultural producers engage in dialogue on a variety of critical issues. BLT animates discourse and initiates a democratic rewriting of contemporary history around and among the people living this history. Organized around literal and metaphorical lunch tables, BLT hosts roundtable sessions to provide both space and time for interdisciplinary and intergenerational discussions. Their signature Artists Roundtables invite Black artists to roundtable discussions, while their People’s Tables invites participation from all community members. The roundtable conversations are audio recorded, transcribed, and metadata tagged for integration into their growing online archive. The archive is an aggregator, cross-pollinating discourse among many individuals and institutions. BLT also hosts Wikipedia Edit-a-thons to mobilize the collective authoring of articles pertaining to the lives and works of Black artists. 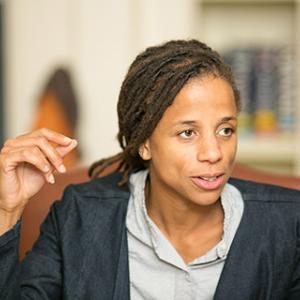 Heather Hart is an interdisciplinary artist based in New York exploring the power in thresholds, questioning dominant narratives and creating alternatives to them through viewer activation. She was awarded grants from the Joan Mitchell Foundation, the Jerome Foundation, NYFA, and Harpo Foundation. Hart’s work includes exhibits at Storm King Art Center, The Kohler Art Center, Eastern Illinois University, Greensboro, NC, Seattle Art Museum, Brooklyn Museum, University of Toronto and a collaborative show at The Drawing Center. She studied at Skowhegan, Whitney ISP, Cornish College of the Arts in Seattle, Princeton University in New Jersey and received her MFA from Rutgers University.

Jina Valentine is currently an Associate Professor in Printmedia at the School of the Art Institute of Chicago. Her interdisciplinary practice is informed by the intuitive strategies of American folk artists and traditional craft techniques, and interweaves histories latent within found texts, objects, narratives, and spaces. She has exhibited at venues including The Drawing Center, The Studio Museum in Harlem, the CUE Foundation, and the Elizabeth Foundation. She has been awarded grants from the North Carolina Arts Council, the Joan Mitchell Foundation, Art Matters, and the Graham Foundation. Jina received her BFA from Carnegie Mellon University and her MFA from Stanford University.